Emeril Power AirFryer 360 plus is not just an air fryer oven, it has a variety of abilities to deliver your desired food. It comes with the functions of six different kitchen appliances thus it will save both of your space, time, and money. Moreover, the sleek designed Emeril also has a large space in the interior that can prepare a lot in one shot. Let’s see if the performance matches or not with the stylish looks.

Having a glance at a comparison or differentiation allows one to have a greater and better concept about things. Let’s have a look at the comparison between two nearly similar featured convection ovens: Emeril Lagasse Power Air fryer 360 vs Cuisinart Air Fryer Toaster oven.​​

First of all, Emeril Lagasse 360 has a burst of 5 different heating elements that makes the total thing a game-changer. All those heating elements with the 360 degrees all-around perfect heating ensure the juiciness and the taste of the dish most. From the speech of users, it performs far better as a convection oven rather than an Airfryer. Moreover, the utilities that it comes with regards one of the best ones that one needs in a smart kitchen. 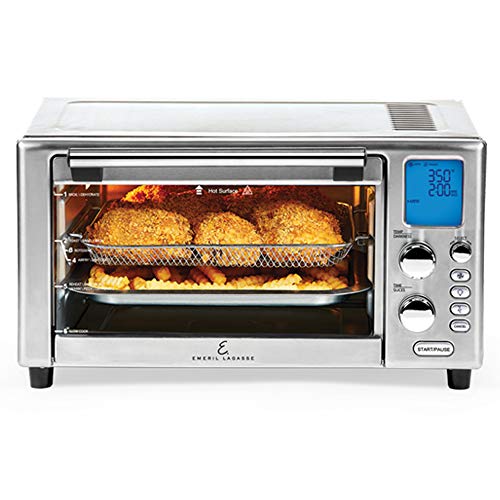 Above all the positive sides, this Emeril cooking master has some drawbacks that you may not notice until you use it since these issues appear while using. Beginning with the heating issue, it comes with a glossy metal body and during the cooking, the outer metal body becomes so hot that it may leave you injured by burning. The rotisserie is also not strong enough to hold decent turkeys and chickens. Other than all these split drawbacks it is an all-in-one cooking chef for delivering you tasty dishes.

When it comes to utilizing a kitchen appliance to its utmost, Emeril Lagasse 360 Airfryer can be a great example. Since it comes with 12 preset functions that allow cooking a versatile range of dishes, it leaves no question for the utility space. More than that it is a 9 in 1 convection oven that allows you to do different sorts of cooking strategies for making the best out of it. You can fry, broil, bake, roast, toast, slow cook, make pizza, warm foods, and much more with it.

In terms of performance, Emeril Lagasse has different and smart technologies. First of all, it has a smart 5-way heating ability that can make your favorite food preparation a lot easier. Furthermore, it has a 360-degree heating feature enabled, that provides heat all over the food and makes it juicy, tender, and tasty. To mention, Emeril Power Airfryer 360 is a 1500 watts countertop oven that can cook foods 40% faster than older ovens.

Using it has never been a sweat-breaking task since it comes with all intuitive controls and methods. All those above-mentioned attributes are with it to make the usage more smooth and effortless to you. All those preset functions are named in big letters so that one can find all these easily. After the cooking period, you will have to do less stuff to clean all the parts since all the parts are made dishwasher safe for ease.

Q. How large of a chicken will fit on the rotisserie?

Because of the spinning movement of the Rotisserie spit, it is not suggested to place anything bigger than a 4-pound chicken upon the spit. The inner capacity of the exact unit can take up to a 10 to 12-pound bird while cooking, not while located on the Rotisserie spit.

Q. Is the interior stainless or non-stick?

It is not stainless and it’s not Teflon and it’s not non-stick but it is a coated steel interior like so many other toaster ovens, it resembles cleaning up easily but over time it will darken. Cleaning it is far easier than others as the door is tempered with glass and that is the area that mostly gets stained from spills or dropping stuff on it.

The answer is, it won’t fit with a standard 9 x 13 baking pan. Rather you can use the baking pan that is included inside the box.

If you’re someone who is looking to sort out and decorate your kitchen countertop by replacing multiple cooking appliances with an all rounder one, then this Emeril countertop convection oven is going to be a handy tool for you. By far the Emeril Lagasse Power Airfryer 360 plus review you have surely got the concept of what this oven is for and who does it suits best? The budget point of view is great since it is under 200 dollars, and has quality specs. Go for it without any doubt if you have an adequate budget and the aforementioned requirements.

You may explore PowerXL Air Fryer Grill Vs Emeril Lagasse 360 – Which Stands As The Best?